Abstract
Objectives: Adolescent suicide is a serious national issue in Korea. Recently, life satisfaction has been recognized as a major factor related to this issue. The main purpose of this study was to identify the domains of life satisfaction that affect suicidal behavior in adolescence.
Methods: Data were collected from eight middle schools in Incheon, Korea. A total of 1297 students answered questions regarding their demographic characteristics, happiness, self-related life satisfaction domains (appearance, leisure time, physical health, and mental health), depressive symptoms, and suicidal behavior.
Results: In the Spearman correlation analysis, female sex, perceived socioeconomic status (SES), happiness, and all four self-related satisfaction scores showed significant correlations with depression and suicidality. Multivariate regression analysis suggested that suicidality was significantly affected by perceived SES, satisfaction with appearance, mental health satisfaction, and depression. Finally, depression was identified as a partial mediator of the association between mental health satisfaction and suicidality, and a complete mediator of the association between female sex and suicidality.
Conclusion: Perceived SES, satisfaction with appearance, and mental health satisfaction significantly affected students’ suicidality, with or without the effect of depression. Health authorities, educators, and family members must be aware of this to identify adolescents at suicide risk earlier.
Keywords : Suicide; Satisfaction; Physical appearance; Mental health; Depression; Adolescent.

Suicide awareness is a critical social issue in Korea. Korea’s suicide rate was the fourth highest worldwide and the highest among the members of the Organization for Economic Cooperation and Development (OECD) in 2019 [1,2]. Although the suicide rate in Korea steadily declined from 31.0 to 24.3 per 100000 people from 2009 to 2017, this rate rose again by 2.3 per 100000 people in 2018 and by 0.3 per 100000 people in 2019. According to age-specific trends during this period, this increase was the highest among individuals in their teens and twenties. In teenagers, the suicide rate has not fallen significantly over the past decade [3]. This may indicate that interventions to prevent adolescent suicides have not been well established.

Given that adolescents are intrinsically immature and vulnerable to external stimuli, the psychological structures that lead to adolescent suicidality must be viewed differently from those of adults. Previous studies on adolescent suicides have included several suicidal risk factors. These include internal factors (e.g., depression, hopelessness, stress, self-esteem, and attitudes toward suicide) [4-6], interpersonal factors (e.g., school and family life) [7], and psychiatric factors (e.g., mood disorders and substance abuse) [8,9].

The primary goal of our study was to identify domain satisfaction specific to the “self” that significantly affected suicidal behavior. Additionally, we examined the mediation effect of depression on the association between these factors and suicidality. To our knowledge, this is the first adolescent study to investigate the significant domains of life satisfaction, especially those focused on the “self,” that affect suicidal ideation, plan, or attempts.

This study was a secondary analysis of an adolescent suicide survey that examined the mental health of adolescents, which included depression, life satisfaction, and suicidality, and their attitudes toward suicidal behavior. The original study sample included 1385 eighth-grade students from eight middle schools located in Jung-gu, Incheon [16]. Excluding 88 respondents, 1297 valid respondents were included in the analysis.

The survey was conducted in September 2018. Homeroom teachers explained the details of the study to the students, who then completed a questionnaire distributed to them.

The Center for Epidemiologic Studies Depression Scale (CESD), first developed by Radloff [17] and revised by Eaton et al. [18], was used to assess the severity of depression. Lee et al. [19] translated and standardized this scale into a Korean version. According to the optimal cut-off value suggested in the study, we classified those who scored less than 13 points as low risk and those who scored more than 13 points as high risk, while using depression as a binary variable [19].

“Non-response/no idea” was converted to N/A and was automatically excluded from the analysis. Histogram and Shapiro-Wilk normality tests confirmed that the data did not have a normal distribution. All analyses were conducted using R Studio version 1.3.1073 (Delaware Public Benefit Corporation, Boston, MA, USA).

We used the Spearman correlation analysis to explore how and in what direction depression and suicidality are correlated with other characteristics of adolescents. Multivariate logistic regression analyses were conducted to determine the independent association of each variable with suicidal ideation, suicidal plans, and suicide attempts. The fit of the model was confirmed using the Chi-square test and maximum likelihood test. Since all variance inflation factor (VIF) values were below 2.5, multicollinearity among variables was ruled out. According to Belsley et al. [21], a VIF above 10 suggests multicollinearity.

The Institutional Review Board of Inha University Hospital (registration number: 2018-06-032) approved the study protocol and waiving of informed consent.

Characteristics of the study population

As presented in Table 1, 653 of the respondents (50.3%) were male and 598 (46.1%) were female. More than half (52.8%) the respondents lived with four family members including themselves, more than half (58%) had no religious affiliation, and most of them (78.3%) exercised regularly or irregularly. In the perceived SES domain, “middle” or “upper-middle” accounted for the largest percentage (65.3%) of respondents.

Correlation between the variables, depression, and suicidality

Spearman correlation analysis between variables and depression and suicidality

Independent effect of variables on suicidality

Multivariate logistic regression analyses helped identify the significant factors that have a consistent effect on suicidal ideation, suicidal plans, and suicidal attempts (Table 3). Before the multivariate adjustment, most variables were significant, except for the number of family members and religious affiliation, which showed no correlation with suicidality. 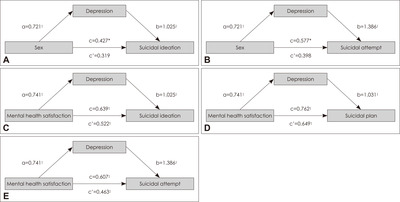 According to this study, in addition to depression, various factors that constitute quality of life, such as happiness, perceived SES, and life satisfaction in the domains of appearance, leisure time, and physical and mental health, were significantly correlated with suicidal behavior. It is also worth noting that these are subjective indicators. Among these, perceived SES, satisfaction with appearance, mental health satisfaction, and depression independently revealed significant effects on suicidal behavior in the multivariate regression analysis. In other words, a negatively perceived SES or a lower domain satisfaction serve as important risk factors for suicidality separately, even after considering the effect of depression, which is a well-known critical risk factor for suicide [4,5,23,24]. On the other hand, there was a small difference in the regression results for suicidal plans. In adolescence, suicidal ideation or an attempt may not necessarily be accompanied by a suicidal plan because of their immature and impulsive nature.

In terms of quality of life, a subjective assessment is more important than just objective figures related to economic conditions [26]. It is not uncommon for adults to attempt suicide out of pessimism regarding their SES. In this study, a negatively perceived SES also significantly affected adolescents’ suicidal plans, which was not mediated by depression. This may be because they are under the emotional and cognitive influences of their parents.

A positive feeling regarding one’s physical features or appearance establishes self-confidence and self-esteem in adolescence and enables a healthy mindset in adulthood. However, today’s generation of adolescents is more likely to have a distorted perception of their appearance as they are exposed to media outlets that incite lookism. This experience makes them consciously and unconsciously evaluate their physical appearance against an unrealistic standard, which negatively affects their mental health. Dissatisfaction with one’s appearance in adolescence can lead not only to depression, but also to suicidal ideation [23,27]. We confirmed that dissatisfaction with appearance contributed to suicidal ideation and suicide attempts, and this association was not mediated by depression.

Mental health satisfaction was the second most important factor affecting suicidal behavior. This effect was mediated by depression; however, it was also present without depression. The perception of mental health has previously been reported as a significant variable for suicidal ideation throughout adolescence. However, no analysis of suicidal plans or attempts has been made [5]. In comparison, physical health satisfaction was not a significant factor. In studies that did not distinguish between physical and mental health, results concerning the subjective assessment of overall health were inconsistent. Some studies have shown a significant effect on suicidal ideation or plans, but not on suicidal attempts [28], while others showed a significant effect on all suicidal behaviors [24].

Happiness has often been mentioned in relation to life satisfaction and mental health. It also showed a significant correlation with suicidal behavior in this study. Nevertheless, no significant impact was found on multivariate regression, and no mediating effects of depression were identified. This could mean that adolescents perceive happiness differently from mental health or that happiness interacts with various factors, including variables not investigated in this study. The ambiguity of happiness and the lack of standardized scales should also be considered.

The study limitations should be noted. First, we did not use a validated life satisfaction scale. Further studies using a validated multidimensional measure, such as the Youth Happiness Index [29], which includes several self-related domains, are needed. Second, only the eighth graders of a particular region participated, which limits generalization. Nevertheless, our results were in line with those of previous studies, which showed that life satisfaction was a significant factor for suicidality [5,6,13,15]. Third, since the psychiatric histories of the participants were not known, it was difficult to determine whether mental illnesses other than depression affected the study results. Fourth, the results did not reflect the type of school or subregional differences, possibly underestimating the effect of confounding factors. Fifth, the ambiguity of happiness is another limitation. Happiness is often described as subjective well-being. According to the OECD, subjective well-being is a good mental state, including all the various evaluations that people make of their lives and the affective reactions to their experiences [30]. However, it is highly likely that eighth graders rated happiness only as their temporary emotion in response to the question “How happy do you think you are now?.” The insignificant result of happiness in the multivariate regression analysis may also support this finding. In future studies, participants should be presented with specific definitions of happiness. Finally, the evaluation of suicidal behavior was oversimplified by including lifetime suicidal behaviors and not excluding non-suicidal self-harm behaviors. Therefore, the association of the variables with suicidality may have been overestimated. Given that previous suicide-related behaviors themselves are important risk factors for suicide [9], our results have significant implications for predicting and preventing suicide risk.

This study proposes that life satisfaction or the subjectiveassessment of the quality of life, significantly affects suicidal ideation, planning, and attempts. Among them, self-satisfaction with appearance and mental health has a critical impact on adolescent suicidality. Additionally, depression not only partially mediates the association between mental health satisfaction and suicidality, but also completely mediates the association between female sex and suicidality. Therefore, female adolescents require adequate consideration of their emotional sensitivity and early encouragement to obtain professional help for depression. Above all, the subjective assessments of appearance, mental health, and depression will assist in screening for the risk of suicidal behavior. Health authorities, educators, and family members require instruction on how to appreciate and respect adolescents’ interests in their appearance and mental health and improve negative self-perceptions.

This research was conducted as part of an adolescent suicide prevention program funded by the Incheon Jung-gu Community Mental Health Center in Korea.