Adverse childhood experiences (ACEs) are those experiences in which individuals aged below 18 years are exposed to traumatic events such as child abuse, neglect, and household dysfunction [1]. Many studies have found that the risks of adverse health behaviors, mental health problems, and chronic disease over the lifetime increase in proportion to the ACEs. In particular, exposure to ACEs is three times higher in persons experiencing depressive symptoms than in non-depressed persons; persons with mental illness, including mood disorder, anxiety, substance abuse, and psychosis have usually had more than three ACEs [2]. A previous study on ACEs and psychiatric disorders in young adulthood reported that child maltreatment experience leads to a 1.97-fold higher risk of post-traumatic stress disorder (PTSD) in adulthood [3].

Recently, evidence has shown that maternal ACEs are associated with offspring developmental delay, behavioral problems, social-emotional functioning, and psychopathology through intergenerational transmission [4]. Studies have shown that maternal trauma history is directly associated with anxiety in their offspring, and maternal experience of childhood abuse is associated with depressive symptoms in the offspring during adolescence [5]. In addition, it has been reported that children of parents with a history of four or more ACEs have, on average, 4.2-fold higher odds of emotional disturbance than children of parents with no ACEs [6]. These results show the cumulative doseresponse-based intergenerational transmission of maternal ACEs.

The participants included mothers with children aged 13 years to 18 years who had attended school for more than 6 months in Jeju Special Self-Governing Province, Korea. Two middle schools and high schools were selected with the cooperation of the Jeju Special Self-Governing Province Office of Education. We sent the survey forms, including the study background and consent to participate, to parents of students in all grades. For data collection, the survey questionnaires were distributed and collected by trained mental health specialists. A total of 245 mother-child dyads participated in this study. Among them, 156 mother-child dyads, excluding those with psychiatric disorders other than PTSD, participated in the final study (Fig. 1). The data were collected from September to December 2017. Written consent was obtained from the mothers and their children. This study was approved by the Institutional Review Board of the Jeju National University Hospital (Grant No. 2018-08-004). 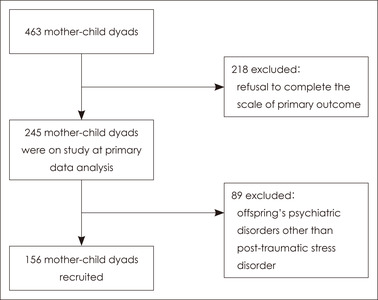 The ACE questionnaire collects retrospective data about childhood experiences until the age of 18. It includes 10 ACEs for child abuse (e.g., verbal, physical, and sexual abuse), child neglect (e.g., emotional and physical neglect) and household dysfunction (e.g., parental divorce, domestic violence, alcohol problem, mental illness, and prison) [8]. When the response to the ACE item is “yes,” it is assigned a score of one point; the accumulated points are added to obtain the total ACE score. In this study, we analyzed the relationship between the total ACE score, three domains (child abuse, child neglect, and household dysfunction) of ACE, and PTSD in the offspring.

The Predictive Scales (DPS) includes only the Diagnostic Interview Schedule for Children (DISC) items that are most predictive of a Diagnostic and Statistical Manual of Mental Disorders, fourth edition (DSM-IV) diagnosis [11] and evaluates the psychiatric symptoms the children display in the last year. DPS has been widely examined, showing high testre-test reliability and internal consistency [12]. A previous epidemiological survey of children and adolescents conducted in South Korea [13] included 33 questions about diagnoses previously found in the DISC-IV but not in the DPS (selective mutism, eating disorder, elimination disorder, PTSD, tic disorder, nicotine dependence, pica, and trichotillomania). The present study used the modified DPS; the DPS of offspring’s psychiatric disorders was completed by the mothers. Each psychiatric disorder’s diagnostic cutoff was defined according to Cubo et al. [14]. This study analyzed PTSD groups diagnosed according to the PTSD cutoff score and used a control group that included offspring without psychiatric disorders, excluding psychiatric disorders other than PTSD.

The Center for Epidemiological Studies Depression Scale for Children (CES-DC), which is developed by the National Institute of Mental Health (NIMH), is a scale used to examine the degrees of depressive symptoms in children and adolescents aged 6–17 years [15]. We used the standardized CES-DC [16]; a high CES-DC score indicates the presence of severe depressive.

To measure adolescent anxiety, we used the Screen for Children Anxiety-Related Disorders (SCARED), which was developed by Birmaher et al. [17] and revised by Kim [18]. It is a self-report scale consisting of 41 questions. The items are scored from 0 to 2, representing not at all, sometimes, and often, respectively. A higher score indicates a higher level of anxiety.

The Beck Depression Inventory (BDI-II), a self-report scale developed by Beck et al. [19], is based on the criteria for depressive disorder in the DSM-IV and consists of 21 questions on cognitive, emotional, and physiological symptoms of depression. The items are scored on a Likert scale from 0 point to 3 points, and the scores for the 21 items are summed; the total score ranges from 0 point to 62 points, where the higher the score the more severe the depression. In the present study, the BDI-II was used to evaluate the severity of maternal depression; we used the standardized scale for the Korean population (Cronbach’s α=0.91) [20].

The mothers completed the ACE questionnaire about maternal ACEs. They also filled in the ETISR-SF and DPS on offspring’s traumatic experience and psychiatric disorders. The offspring answered the CES-DC and SCARED on depression and anxiety, respectively. The CES-DC, SCARED, and maternal BDI-II scores were used in the regression analysis as variables that can affect PTSD in the offspring.

We analyzed the participants’ sociodemographic characteristics, frequency of ACE domains, and offspring’s traumatic experience through descriptive analysis. The frequency of the offspring’s traumatic experience and PTSD, according to maternal ACEs, was verified by the chisquared test; the sum of traumatic experiences was tested by the independent sample t-test. The chi-squared analysis was carried out to compare the frequency of a maternal ACE item between the PTSD group and the control group. A multivariate logistic regression analysis was conducted to adjust for the emotional state of the children and mothers using CES-DC, SCARED, maternal BDI-II, and socioeconomic variables such as socioeconomic status, maternal age, maternal education level, and offspring’s age and sex. We examined the odds ratios (OR) and 95% confidence intervals (CI) of the total maternal ACE score and the scores on the three domains of maternal ACEs in predicting PTSD in the offspring. SPSS version 18 (SPSS Inc., Chicago, IL, USA) was used for data analysis, and the significance level of all statistical analyses was p<0.05.

Sociodemographic characteristics of the participants

Comparison of demographic variables according to maternal ACEs

PTSD in the offspring and maternal ACEs

Our results are consistent with those of previous studies, namely that parents’ traumatic experiences in childhood increased the risk of psychiatric disorders in their offspring. Haynes et al. [21]. reported that when the offspring had depression and anxiety, the caregivers had many ACEs, such as alcohol use, domestic violence, mental health problems, and verbal abuse. There are few studies on the relationship between maternal ACEs and PTSD in the offspring. Maternal childhood physical and sexual abuse and history of multiple ACEs are significant predictors of PTSD in the offspring [22]. Previous studies have shown that if parents have PTSD, their offspring are more likely to suffer from childhood trauma [23], and maternal chronic PTSD significantly predicts PTSD symptoms in the offspring [24].

Our finding that mothers who experienced ≥3 ACEs showed a higher ORs of PTSD in the offspring suggests that maternal ACEs above a certain threshold can affect intergenerational transmission of PTSD to the offspring. A previous study reported that when the caregiver is exposed to four or more ACEs, the offspring are more likely to experience anxiety and depression, suggesting a doseresponse-based transmission of ACEs [21].

In the present study, maternal household dysfunction was a risk factor associated with PTSD in the offspring. Maternal household dysfunction, such as parental alcohol problems, psychiatric disorders, and divorce, increased the risk of poor health behaviors and symptoms in the mothers, such as alcoholism, depression, and suicide ideation [8]. Maternal childhood adversity affects the offspring’s mental health through emotional neglect or abuse. In previous studies, parental alcohol use disorder was related to physical, sexual, and witness violence experienced by the children and was a risk factor for lifetime PTSD [25].

Regarding the mechanism of intergenerational transmission leading to maternal ACEs and offspring’s traumatic experience and PTSD, there is a possibility that the offspring’s biological vulnerability that leads to trauma-related mood and anxiety symptoms after trauma exposure is increased. ACEs cause changes in hypothalamic-pituitary-adrenal (HPA) axis-relataed gene expression via epigenetic regulation, which affects the dysregulation of the glucocorticoid signaling and stress neurocircuitry [26], and the offspring can be vulnerable to mood and anxiety disorders, including PTSD. Second, maternal ACEs are likely to lead to psychiatric disorders such as maternal depression [27]. Traumatic experiences such as child abuse in the family or maternal mental health problems make it difficult for the mothers to help their offspring regulate their emotions after trauma. In a previous study, the mother’s experiences of domestic violence and related PTSD symptoms were reported as predictors of poor emotional and behavioral outcomes when their children experienced adverse life events [28]. In addition, maternal ACEs tend to lead to dysfunctional parenting of the offspring, resulting in difficulties related to emotional and arousal regulation in the offspring. Third, maternal ACEs increase the risk of traumatic experiences in the offspring. The mother’s childhood maltreatment directly predicts offspring victimization [29]. Higher parental ACEs predict higher ACEs in the offspring [30].

This study has several limitations. First, it is difficult to generalize the results because the present study was conducted in Jeju area. Second, although we used DPS including the DSM-IV criteria to confirm PTSD, DPS is not a structured interview tool. Third, since this study evaluated the DPS data reported by the mothers, there is a possibility of the reports being different from the real experience of the offspring. Fourth, there is a possibility of recall bias or underestimation of ACEs and traumatic experiences because the present study used a retrospective questionnaire to evaluate maternal ACEs and traumatic experiences in the offspring. Fifth, this was a cross-sectional study. In the future, prospective studies on inter-generational transmission of ACE are needed.

This work was supported by a research grant from Jeju National University Hospital in 2018.